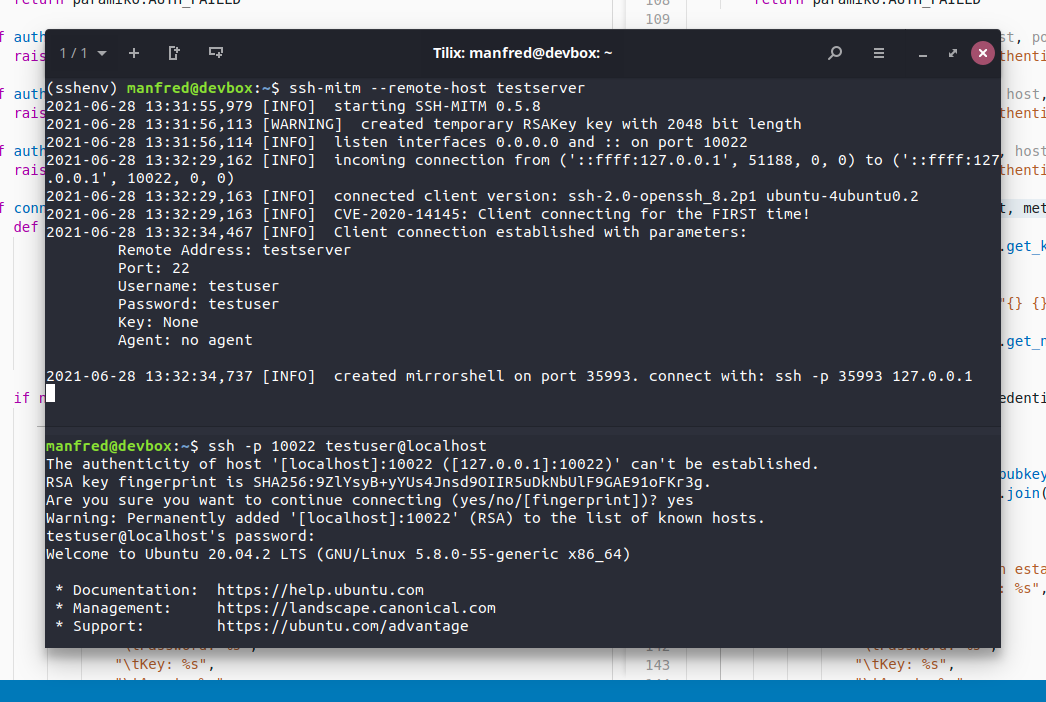 Connect to the network

To start an intercepting mitm-ssh server on Port 10022, all you have to do is run a single command.

Now let's try to connect to the ssh-mitm server.

You will see the credentials in the log output.

When a client connects, the ssh-mitm starts a new server, which is used for session hijacking.

To hijack this session, you can use your favorite ssh client. All you have to do is to connect to the hijacked session.

Public key authentication is a way of logging into an SSH/SFTP account using a cryptographic key rather than a password.

The advantage is, that no confidential data needs to be sent to the remote host which can be intercepted by a man in the middle attack.

Due to this design concept, SSH-MITM proxy server is not able to reuse the data provided during authentication.

It you need to intercept a client with public key authentication, there are some options.

SSH supports agent forwarding, which allows a remote host to authenticate against another remote host.

The client must be started with agent forwarding enabled.

In most cased, when git is used over ssh, public key authentication is used. The default git command does not have a forward agent parameter.

To enable agent forwarding, git has to be executed with the ``GIT_SSH_COMMAND`` environment variable.

When ssh-mitm is used to intercept rsync, the port must be provided as a parameter to rsync. Also the agent can be forwarded, if needed.

To sync a local directory with a remote directory, rsync can be executed with following parameters.

SSH-MITM has some client exploits integrated, which can be used to audit various ssh clients like OpenSSH and PuTTY.

Install ssh-mitm on your Linux distribution

Is there a problem with ssh-mitm? Report this app