Install latest/stable of WisToolBox for Desktop 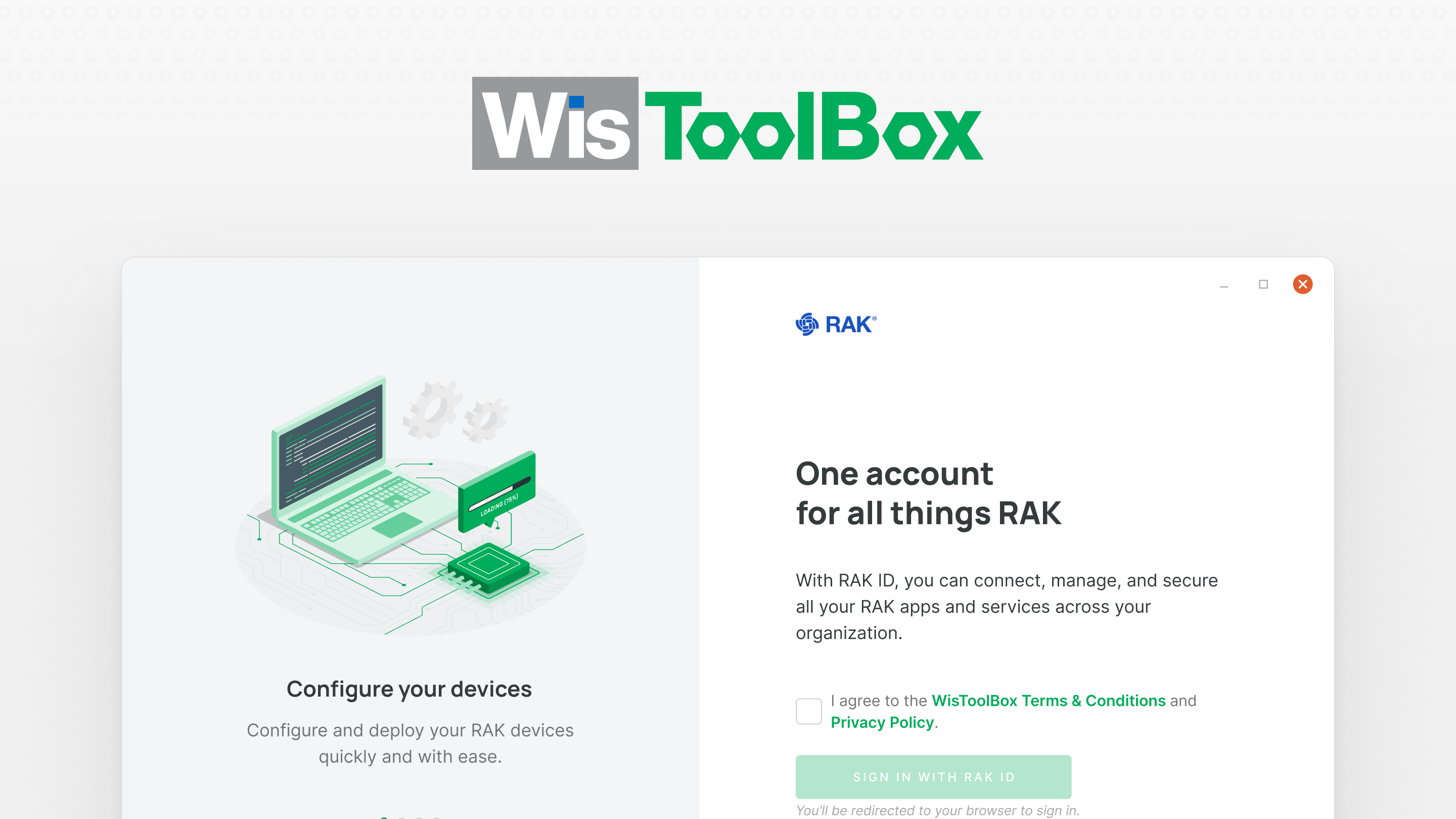 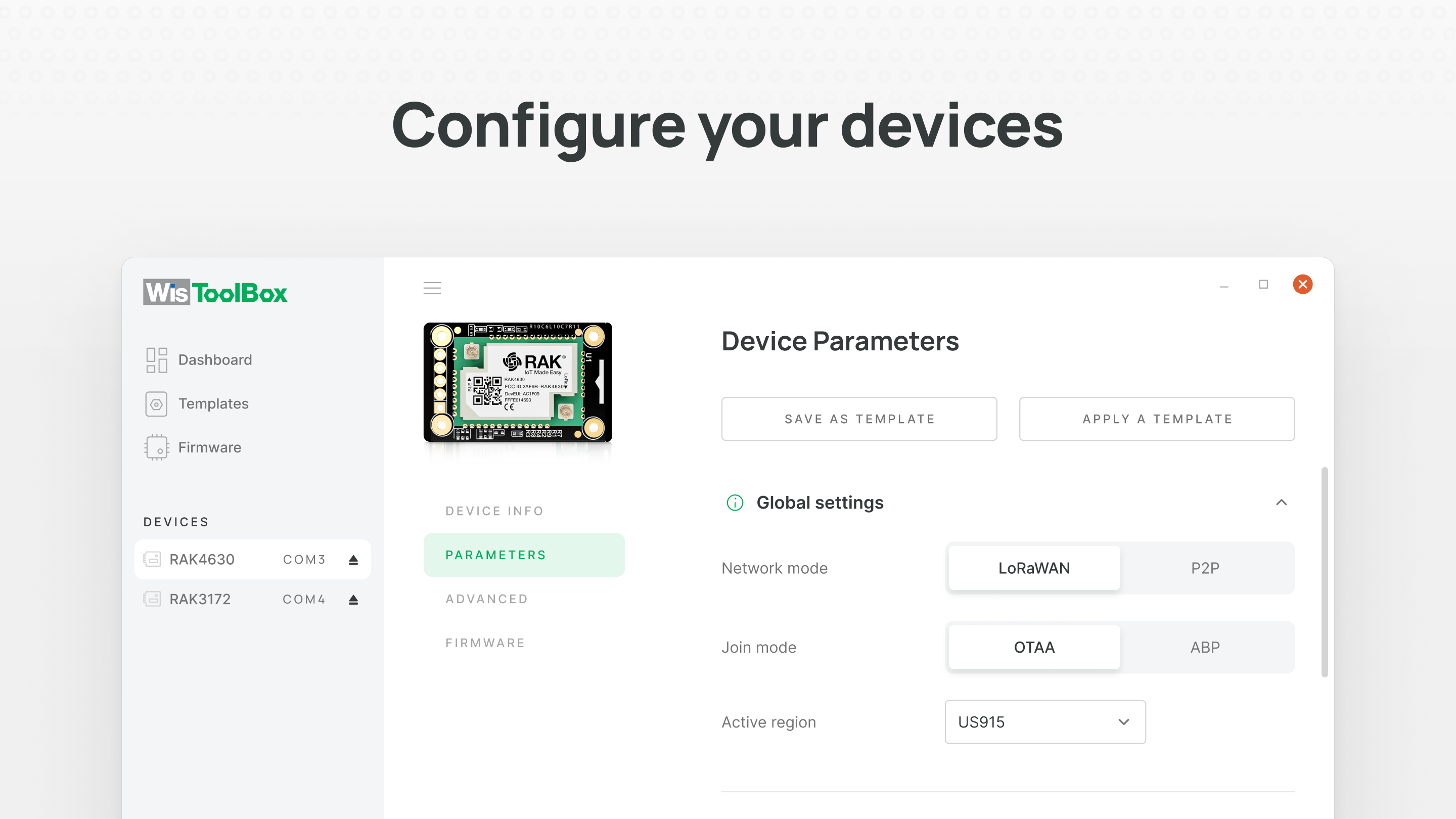 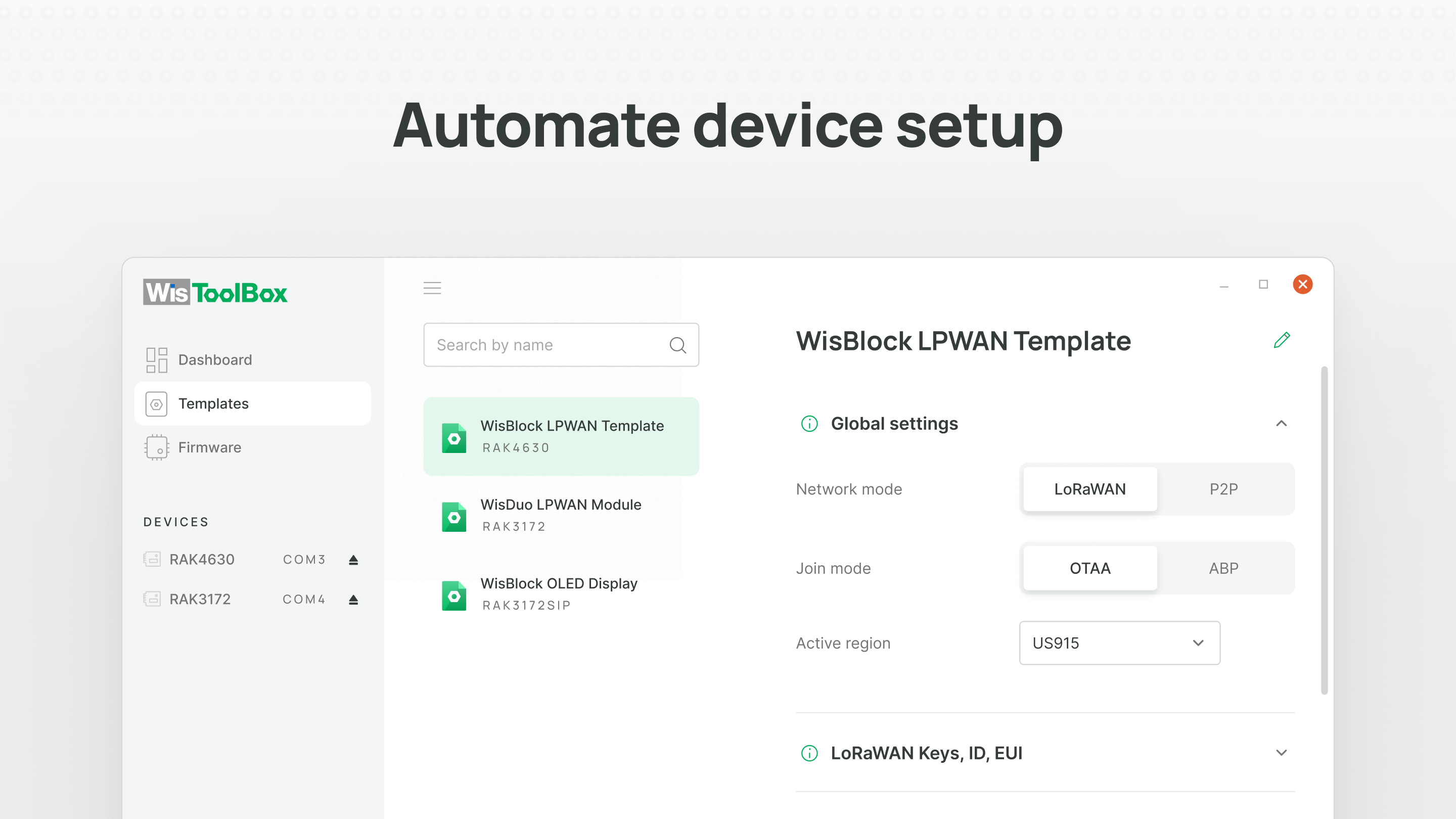 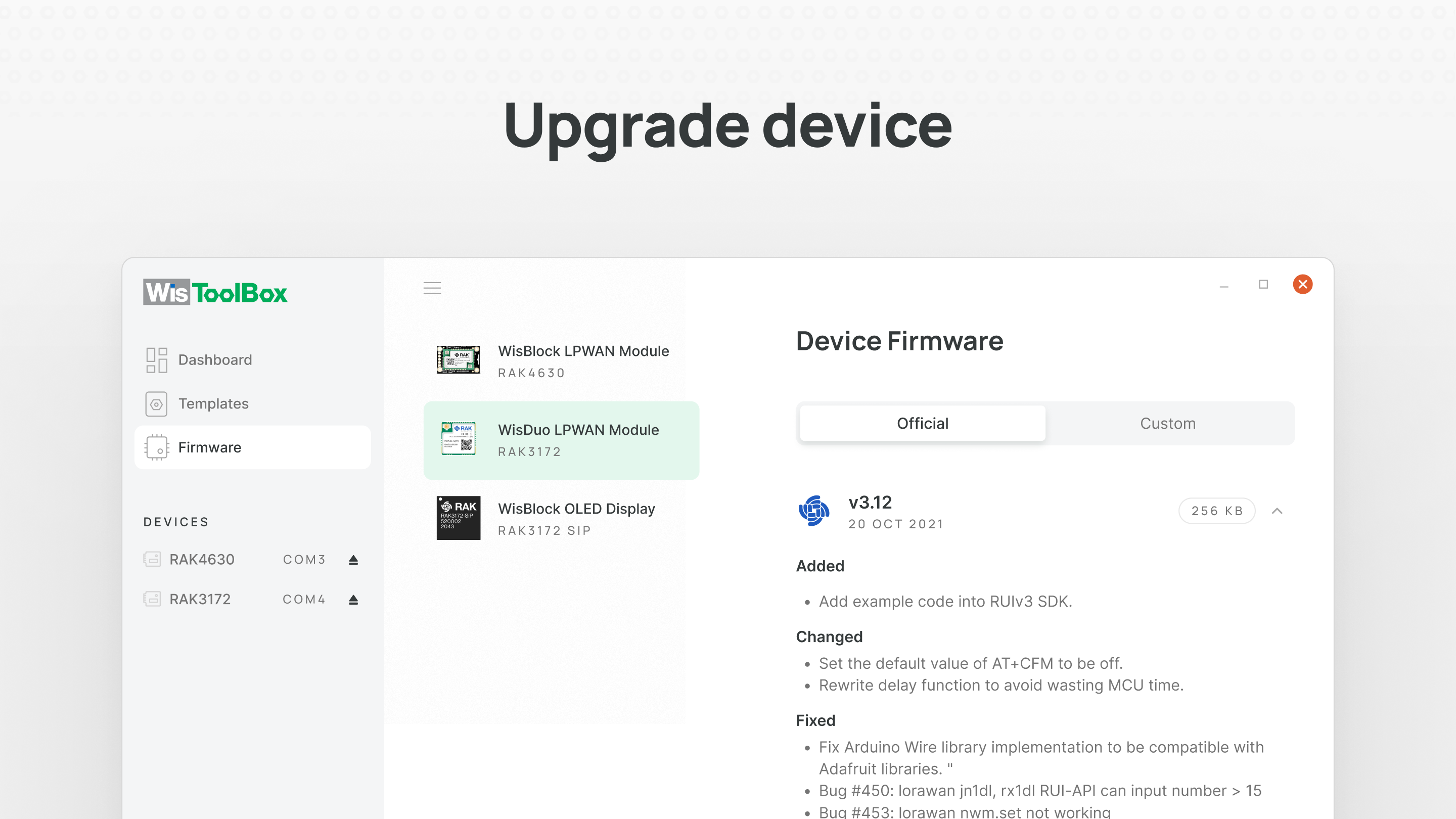 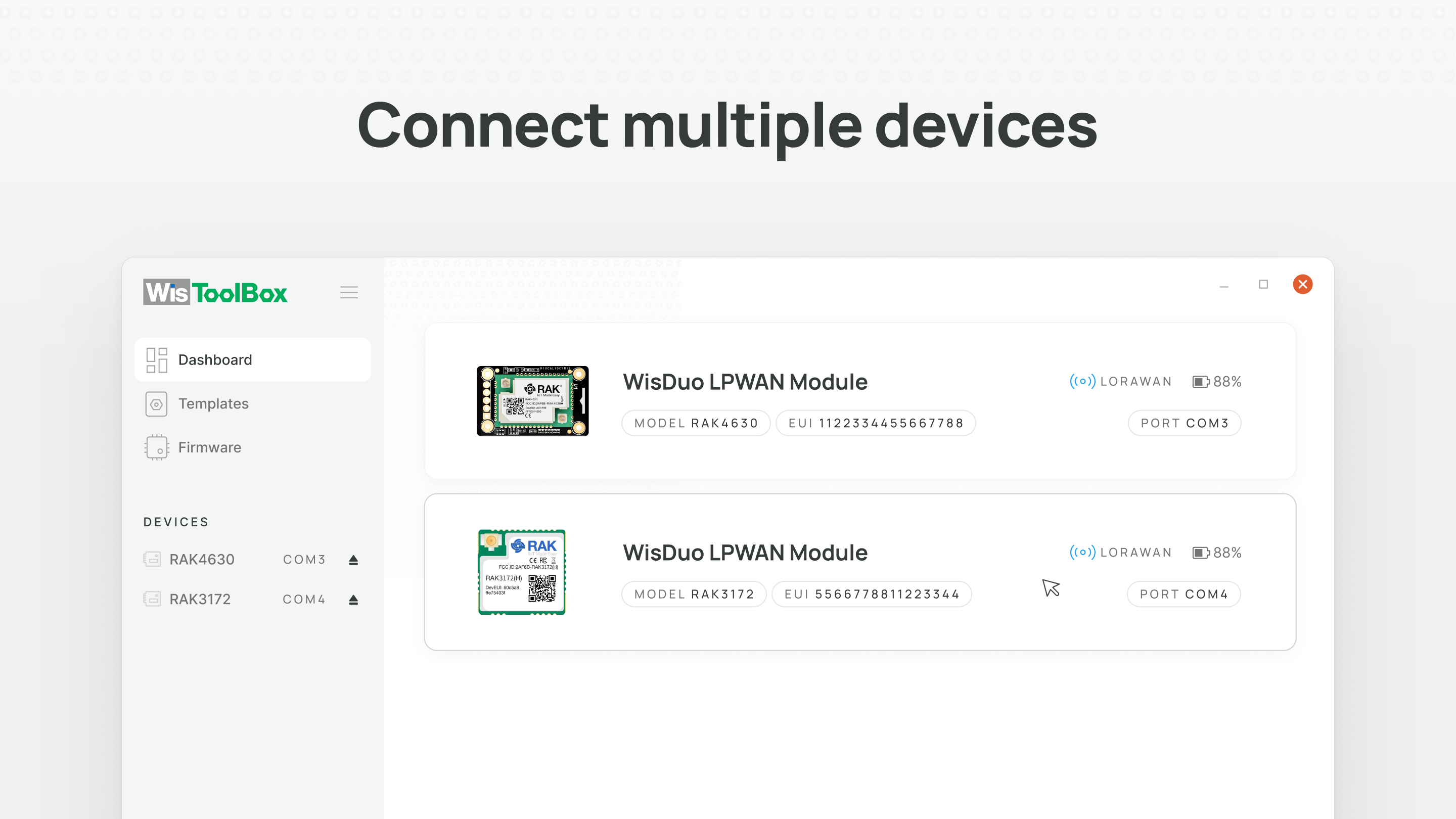 • Jumpstart your IoT projects with WisToolBox

Get the fastest device management tool to configure and deploy your RAK end devices.

Power up the app’s capabilities by signing in with RAK ID - an authentication tool developed by RAKwireless. Store up to 1 GB of data on the cloud and sync changes as they happen in real time. Set up an entire network of RAK devices and supporting apps for your IoT projects with RAK ID as the single source of truth.

The RAKwireless Unified Interface V3 (RUI3) is designed to help IoT developers make their IoT products faster. It is compatible to RAK LPWAN modules. It supports the standard AT Commands which is known to many people, as well as the Binary Mode. The Binary mode is an improved version of the AT command with its efficient byte-array based protocol and implementation of checksum. RUI3 also allows you to create your own custom firmware using RUI3 APIs that are compatible to popular IDEs like Arduino and Visual Studio. With custom firmware, you will not need any external host microcontroller or microprocessor which can save you cost, circuit board space and current consumption.

• Make the most of LoRaWAN

Choose from the available configuration to set up your device, switch between network modes, join the vast LoRaWAN network, and change configuration freely. Meet the all-new and modern interface to stay connected at all times with your devices or enjoy the timeless console experience.

• Move with the speed of templates

Configure a device and save the configuration as a template in one click. Create hundreds of templates to configure as many devices as you wish. Import templates, store them on the cloud and edit as you go.

Keep the devices open to official RAK firmware updates, or bring your own custom firmware. Import firmware on a click, store them on the cloud and update as you go.

Thank you for downloading WisToolBox. We hope you’ll like it! Questions? Suggestions? Please send them to support@wistoolbox.rakwireless.com

Details for WisToolBox for Desktop

Where people are using WisToolBox for Desktop

Install WisToolBox for Desktop on your Linux distribution

Is there a problem with WisToolBox for Desktop? Report this app